A 63 year old male presented with extreme fatigue and weakness of unknown duration. Physical examination revealed scattered petechiae and mildly decreased muscle strength. His past medical history included a one year history of cough that had recently improved. Laboratory investigation demonstrated severe anemia and thrombocytopenia with a mild leukopenia.

A biopsy of the bone marrow was performed. 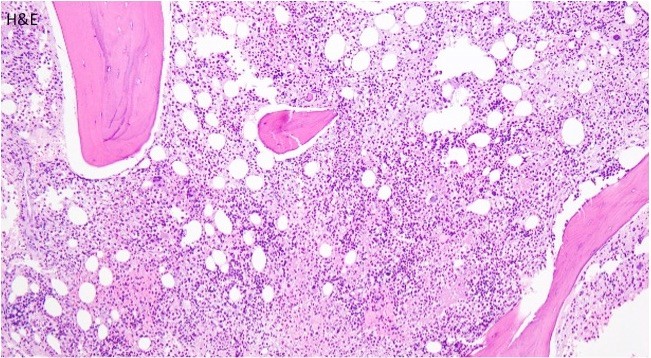 The bone core biopsy revealed a hypercellular marrow for the patient’s age with a pronounced lymphohistiocytic infiltrate involving 30-40% of the biopsied marrow space. Interspersed along the infiltrate were large, atypical lymphoid cells with pleomorphic nuclei and prominent nucleoli. The marrow aspirate smear reveals progressive trilineage hematopoiesis with scattered hemophagocytic histiocytes.

The detection of mononuclear Hodgkin cells staining for CD30 along with a characteristic reactive infiltrate, together with dim PAX-5 staining, positive EBER, and negative CD20 is sufficient to diagnose involvement of a secondary site by Hodgkin lymphoma. The lymphoma was associated with a secondary hemophagocytic lymphohistiocytosis.

Hodgkin lymphoma (HL) is a B-cell derived monoclonal lymphoid neoplasm. HL has a bimodal age distribution, with teenagers or patients in their early 20s and patients older than 55 years having the highest incidence. Although the typical presentation is with peripheral lymph node involvement, extranodal sites may be involved by either direct invasion or hematogenous dissemination. These sites include the spleen, liver, lung and bone marrow. About one third of patients have constitutional symptoms such as high fevers, night sweats, and weight loss.

CHL is composed of mononuclear Hodgkin cells and multinucleated Reed-Sternberg cells surrounded by an infiltrate of non-neoplastic reactive cells that might encompass small lymphocytes, plasma cells, eosinophils, neutrophils, and histiocytes. Fibrosis may also be present in the form of bands or may be more diffusely spread. The four histological subtypes: nodular sclerosis CHL, lymphocyte-rich CHL, mixed cellularity CHL, and lymphocyte-depleted CHL are based on the composition and characteristic of the reactive infiltrate, and the cytological features of the neoplastic cells.

The classic Reed-Sternberg cell is binucleated, with prominent eosinophilic nucleoli, often referred to as having an “owl’s eye” appearance. However many neoplastic cells are not of the typical Reed-Sternberg variant, and can be mononuclear, termed Hodgkin cells, or cells with more condensed cytoplasm and pyknotic reddish nuclei known as mummified cells.

Hodgkin/Reed-Sternberg cells (HRS) in Classic Hodgkin Lymphoma fail to preserve their B-cell traits, and this is reflected by their immunophenotype. The majority of cases are negative for CD45, and although CD20 may be expressed, it is usually present only on a minority of the neoplastic cells and stain with varied intensity. The HRS cells stain with PAX5 with a lower intensity than the surrounding reactive cells, making them easily detectable. The HRS cell stains positive for CD30 and CD15 in nearly all cases. Both of them stain the membrane with accentuation around the Golgi apparatus. EBV associated Hodgkin Lymphoma will stain positive with EBER, detecting EBV-encoding small RNA.

Bone marrow involvement is rare, ~5-10% of cases, and suggest vascular dissemination of the disease. Bone marrow trephine biopsies are commonly performed in the staging of patients with newly diagnosed CHL which guides the further treatment and gives us information about prognosis. Involvement of the bone marrow represents stage IV disease (advanced stage) in the Ann Arbor staging classification and patients with advanced stage disease typically receive a more prolonged course of chemotherapy. The 5-year survival rate of stage IV Hodgkin lymphoma is ~65%,  a much worse prognosis when compared with stage I, stage II, and stage III with ~90%, ~90%, and ~80% 5-year survival rates respectively.

-Kamran M. Mirza, MD PhD is an Assistant Professor of Pathology and Medical Director of Molecular Pathology at Loyola University Medical Center. He was a top 5 honoree in ASCP’s Forty Under 40 2017. Follow Dr. Mirza on twitter @kmirza.