Which epidermal layer is indicated by the arrow?

The answer is E, stratum spinosum. The stratum spinosum, also known as the prickle cell layer of the skin, is often several cell layers deep, and is located immediately above the stratum germinativum. Cells in this layer are polygonal, and are connected to each other by numerous desmosomes. During fixation, the cell membrane retracts around desmosomal contact points, giving the cells a prickly appearance. The cells contain many bundles of intermediate filaments as well as keratinosomes, which are membrane-bound granules thought to deposit a “toughening” layer on the surface of the cell membrane. 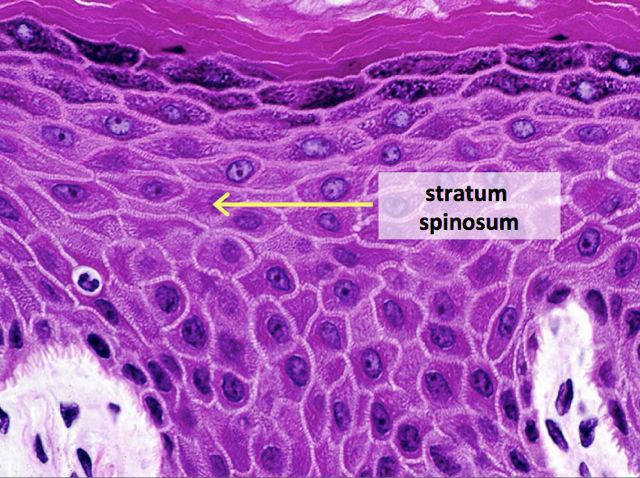 The stratum germinativum (also known as the basal layer) is composed of a single layer of cells adjacent of the basal lamina. The cells are tall cuboidal or columnar, and are connected to the basement membrane by hemidesmosomes, and to other cells by desmosomes. Cells in the basal layer are mitotically active, and contain numerous polyribosomes and intermediate filaments. 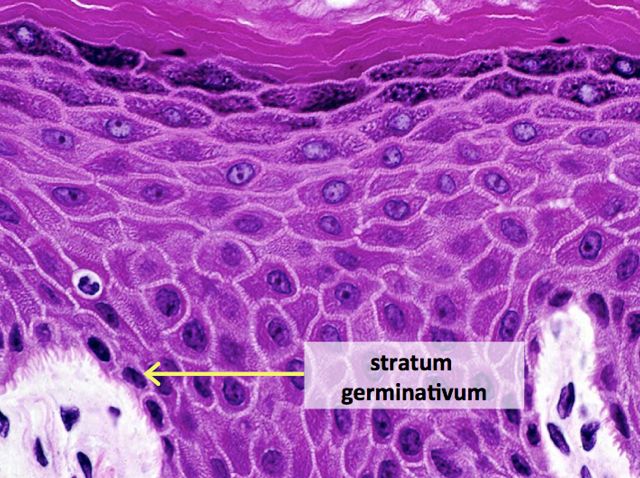 The stratum granulosum is 3 to 5 cell layers thick, and is composed of flattened, polygonal cells arranged with the long axis parallel to the basement membrane. The cytoplasm of these cells contains numerous basophilic granules, called keratohyalin granules, which are thought to be keratin precursors.

The stratum lucidum is not truly a distinct layer of skin, but rather a staining artifact. It is visible in some sections of thick skin as a glassy-appearing, eosinophilic artifact at the bottom of the stratum corneum. It is not present in this particular image of epidermis.

The stratum corneum is the outermost layer of skin. The thickness of this layer varies considerably from region to region in the body. The cells of this layer are dead, flattened, and fused together, with completely keratinized cytoplasm.

-Kristine Krafts, MD, is an Assistant Professor of Pathology at the University of Minnesota School of Medicine and School of Dentistry and the founder of the educational website Pathology Student.