A 54 year old male with a diagnosis of HIV (last CD4 count was 301 on 11/2016) currently on HAART presented to the Beth Israel Deaconess Medical Center (BIDMC) ED on 2/28/2017 with an acute onset of progressive neck swelling over the course of 4-5 days. Laboratory values on presentation was significant for a LDH of 1061 IU/L. Other laboratory values were stable. Upon CT imaging with contrast of the neck, an extensively necrotic right cervical lymphadenopathy was present and was extending into the supra- and infraclavicular chain. No mediastinal or hilar lymphadenopathy was noted.

On 3/1/2017, the patient underwent an ultrasound guided core needle biopsy of the right cervical mass (see images). By immunohistochemistry, the neoplastic cells are positive for CD138 and MUM1. PAX5 shows dim and heterogeneous staining in a subset of cells while CD79a highlights a minor component of the lymphoid population. CD3 and CD5 are positive in T-cells occupying a small subset of the lymph node. CD20, BCL2, BCL6, BCL1, CD30, CD56 and HHV8 are negative. By Ki-67 immunostaining, the proliferation index approaches 100%. In-situ hybridization for Epstein-Barr virus encoded RNA (EBER ISH) is positive in a major subset of cells.

By cytogenetic analysis, only two cells were available for metaphase interpretation and it showed a translocation between the long arms of chromosomes 8 and 14 and by FISH, a t(8;14)(q24.1;q32) was noted, indicating an IGH/MYC rearrangement. 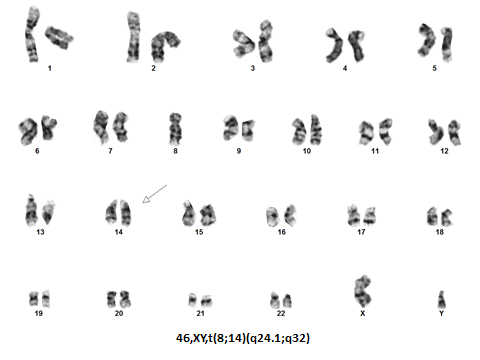 Overall, the morphologic, immunophenotypic, and cytogenetic findings in conjunction with the clinical features of a HIV positive male and EBV association, the diagnosis is in keeping with a plasmablastic lymphoma. 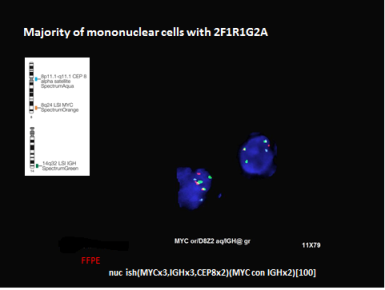 Plasmablastic lymphoma is a diffuse proliferation in which the cells resemble immunoblasts but share an immunophenotype similar to that of plasma cells. First described in the oral cavity, especially among HIV infected patients, it can present in a variety of extranodal sites, such as skin, soft tissue, and gastrointestinal tract. Although uncommon, plasmablastic lymphoma has its highest incidence among HIV infected individuals. Most patients are at stage III or IV at presentation with an intermediate to high risk IPI score. The tumor cells of plasmablastic lymphoma are invariably infected by Epstein-Barr virus (EBV) and are consistently negative for HHV8. According to Balague et al.2, up to 39% of plasmablastic lymphomas demonstrate a MYC translocation, all of which involved the IGH gene. Generally, plasmablastic lymphoma displays a complex karyotype, although some cases display an isolated MYC rearrangement without a complex karyotype. Taddesse-Heath et al.3 has shown a small cohort that is positive for gains in odd-numbered chromosomes 3, 5, 7, 9, 11, and/or 15, similar to that seen in plasma cell myeloma. The clinical course of plasmablastic lymphoma is quite aggressive with most patients dying within one year after diagnosis. Current first line treatment for plasmablastic lymphoma is dose-adjusted EPOCH with or without bortezomib, intrathecal prophylaxis, and possible autologous stem cell transplantation in first remission candidates. Future directions of therapy include chimeric antigen receptor (CAR) T-cells and small molecular inhibitors against the MYC bromodomain4.