A 26 year old African American female with sickle cell anemia presented to a New York emergency room with cough, chest pain, fever and shortness of breath. Laboratory results showed an increased white blood cell count, slightly decreased platelet count and a hemoglobin of 6.2 g/dl. Her reticulocyte count was 7%, considerably below her baseline of 13%. Consulting the patient’s medical records revealed history of stroke as a child and subsequent treatment with chronic blood transfusions. She was admitted to the hospital for acute chest syndrome and aplastic crisis and care was transferred to her hematologist. Two units of RBCs were ordered for transfusion.

The blood bank technologists checked the patient’s blood bank history and noted her blood type was A, Rh(D) positive, with a history of a warm autoantibody and anti-E. The current blood bank sample confirmed the patient was blood type A, RH(D) positive with a negative DAT but the antibody screen was positive. Anti-E was identified. Per request of the hematologist, phenotypically similar units were found and the patient was transfused with 2 units of A RH(negative), C/E/K negative, HgS negative, irradiated blood. The patient’s hemoglobin rose to 8g/dl and she was discharged from the hospital 3 days after transfusion.

Ten days after discharge the patient returned to the emergency room with symptoms including aching muscles, fever and chills. A delayed transfusion reaction was suspected. A type and screen was immediately sent to the blood bank. The post transfusion type and screen remained positive for anti-E, DAT was negative. No additional antibodies were identified. However, a CBC sent to the lab at the same time revealed malarial parasites on the peripheral smear. The patient was consulted for a more complete medical history and reported that she had never traveled outside of the country. A pathology review was ordered and the patient was started on treatment for Plasmodium falciparum. 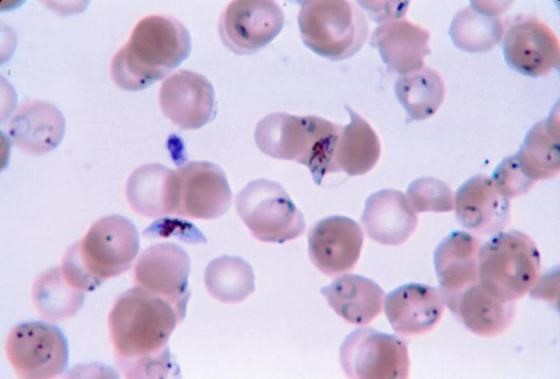 Red Blood cell transfusions can be life saving for patients with sickle cells anemia. These patients are frequently transfused by either simple transfusion of red cell units or by exchange transfusion. Because of this, alloimmunization is reported to occur in 20% to 40% of sickle cell patients.1 Blood bank technologists are very diligent in adhering to strict procedures and follow a standard of practice aimed to prevent transfusion reactions. While preventing immune transfusion reactions may be the most forefront in our minds when transfusing the alloimmunized patient, it is important to consider transfusion transmitted diseases as a potential complication of blood transfusions.

Donors, especially those from malarial endemic countries who may have partial immunity, may have very low subclinical levels of Plasmodium in their blood for years. Even these very low levels of parasites are sufficient to transmit malaria to a recipient of a blood donation. Though very rare, transfusion-transmitted malaria remains a serious concern for transfusion recipients. These transfusion-transmitted malaria cases can cause high percent parisitemia because the transfused blood releases malarial parasites directly into the recipient’s blood stream.

Blood is considered a medication in the United States, and, as such, is closely regulated by the FDA. Blood banks test a sample of blood from each donation to identify any potential infectious agents. Blood donations in the US are carefully screened for 8 infectious diseases, but malaria remains one infectious disease for which there is no FDA-approved screening test available. For this reason, screening is accomplished solely by donor questioning.2 A donor is deferred from donating if they have had possible exposure to malaria or have had a malarial infection. Deferral is 12 months after travel to an endemic region, and 3 years after living in an endemic region. In addition, a donor is deferred from donating for 3 years after recovering from malaria. It is important, therefore, for careful screening to take place by questionnaire and in person, to make sure that the potential donor understands and responds appropriately to questions concerning travel and past infection.

Malaria was eliminated from the United States in the early 1950’s. Currently, about 1700 cases of malaria are reported in the US each year, almost all of them in recent travelers to endemic areas. From 1963-2015, there have been 97 cases of accidental transfusion-transmitted malaria reported in the United States. The estimated incidence of transfusion-transmitted malaria is less than 1 case in 1 million units.4 Approximately two thirds of these cases could have been prevented if the implicated donors had been deferred according to the above established guidelines.3 While the risk of catching a virus or any other blood-borne infection from a blood transfusion is very low, a blood supply with zero risk of transmitting infectious disease may be unattainable. With that being said, the blood supply in the United Sates today is the safest it has ever been and continues to become safer as screening tests are added and improved. Careful screening of donors according to the recommended exclusion guidelines remains the best way to prevent transfusion-transmitted malaria.

-Becky Socha, MS, MLS(ASCP)CM BB CM graduated from Merrimack College in N. Andover, Massachusetts with a BS in Medical Technology and completed her MS in Clinical Laboratory Sciences at the University of Massachusetts, Lowell. She has worked as a Medical Technologist for over 30 years. She’s worked in all areas of the clinical laboratory, but has a special interest in Hematology and Blood Banking. When she’s not busy being a mad scientist, she can be found outside riding her bicycle.