55 year old woman with no significant past medical history presented with two weeks of increasing fatigue, nausea and vomiting. She was subsequently found to have a leukocytosis (WBC = 31.1) and marked splenomegaly (19 cm). 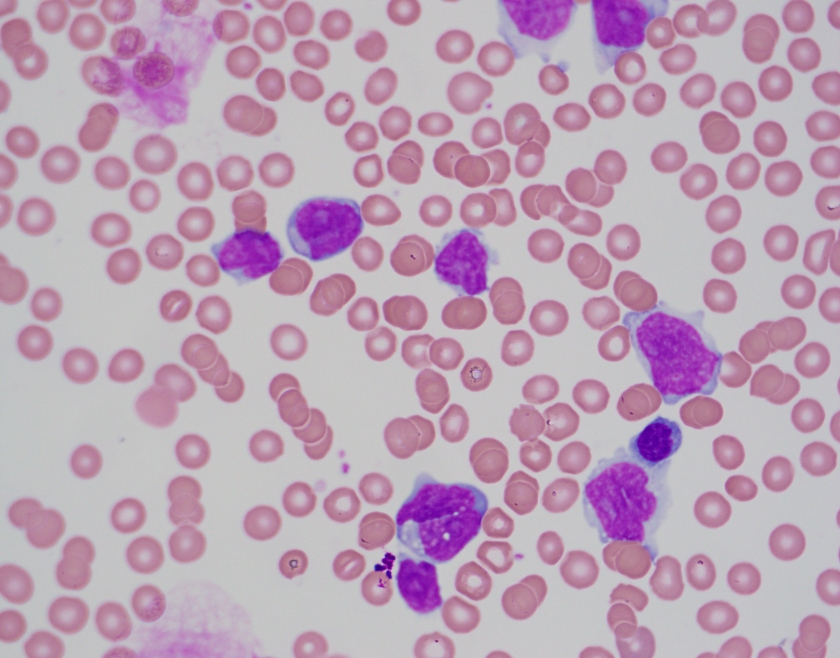 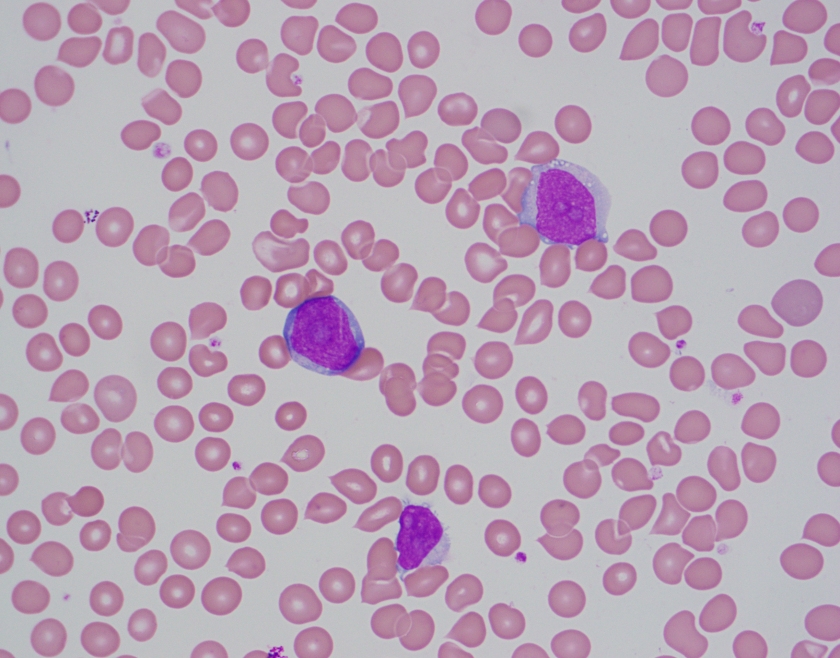 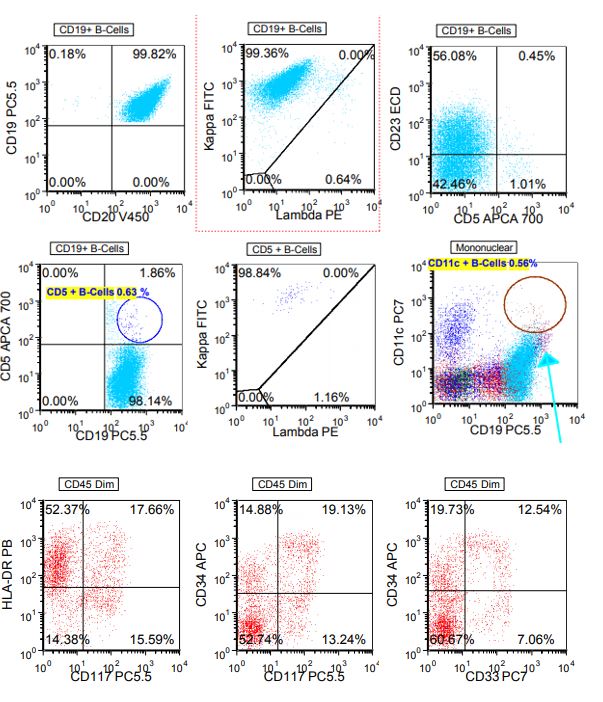 The peripheral blood shows a population of atypical cells that at first may look like blasts. However, the variable size, round to markedly irregular nuclear contours, large prominent nucleoli and mild to moderate amounts of cytoplasm favor lymphoma cells.

The bone marrow aspirate shows the vast majority of the cellularity is composed of a pleomorphic population of lymphoma cells that are varied in size from small to large with mild to moderate cytoplasm, round to irregular nuclear contours and prominent nucleoli. Occasional maturing erythroid and myeloid precursors are present.

The core biopsy shows a marrow with a cellularity of approximately 70%. There is an interstitial infiltrate of atypical mononuclear cells with frequent scattered mitoses occupying 70% of the overall cellularity. By immunohistochemistry performed on the core biopsy, B-cell marker CD20 highlights the majority of the infiltrating lymphocytes, which co-express BCL1 (CCND1).

Flow cytometry revealed a population of CD19 and CD20 positive kappa (bright) restricted B-cells that were also positive for CD23 in a subset. They did not express any other characteristic antigens including CD5, CD10 and CD11c. Importantly, as there was initial concern for acute myeloid or lymphoblastic leukemia, no abnormal events were identified in the CD45 dim “blast” gate, with CD34 positive blasts showing normal maturation.

Cytogenetics revealed a complex abnormal karyotype. The most important finding was a translocation involving the long arms of chromosome 11 and 14 resulting in the IGH/CCND1 translocation that is characteristic of mantle cell lymphoma. Interestingly, the FISH probe showed that there were 4 IGH/CCND1 fusions indicating an extra copy of the derivative chromosome 14. Additional FISH probes showed a deletion of the TP53 gene on 17p13 and greater than 10 copies of the MYC gene on chromosome 8, consistent with MYC amplification.

Overall, the findings are consistent with a pleomorphic variant of mantle cell lymphoma with leukemic peripheral blood involvement. The cytogenetic findings portend an unfavorable prognosis.

Mantle cell lymphoma is generally characterized as an aggressive lymphoma of mature B-cells. It accounts for approximately 3-10% of non-Hodgkin lymphomas and tends to occur in older men. Lymph nodes are the most commonly involved site; however the bone marrow and peripheral blood are frequently involved as well. There are multiple morphologic variants of mantle cell lymphoma. The two aggressive variants include blastoid and pleomorphic. The blastoid variant has cells that resemble lymphoblasts with dispersed chromatin and large prominent nucleoli. The pleomorphic variant is characterized by a spectrum of cells, with many large cells with irregular nuclear contours, pale cytoplasm and variably prominent nucleoli. These two variants are clinically significant because they portend a worse prognosis. 1

The patient’s cytogenetic findings also portend a poor prognosis. IGH/CCND1 is a translocation between the immunoglobulin heavy chain on chromosome 14 and cyclin D1 on chromosome 11. This translocation leads to the overexpression of cyclin D1. However, Cyclin D1 is a “weak” oncogene and is not sufficient by itself to lead to the development of lymphoma. There are numerous secondary chromosomal aberrations and mutations that must occur to result in the presentation of mantle cell lymphoma. A paper by Beà et al. performed whole genome and/or whole exome sequencing on 29 cases of mantle cell lymphoma. They detected around 3,700 somatic mutations per tumor. ATM, CCND1 and TP53, which have previously been described as drivers in mantle cell lymphoma, were found frequently mutated. TP53 mutations were found in 28% of the lymphomas.2

MYC is a potent proto-oncogene located on chromosome 8. It mainly functions as a transcription factor and its activation leads to increased DNA replication, protein synthesis and alterations in cell metabolism among many other changes. The ultimate effect is increased cell proliferation and tumorigenesis. MYC amplification or translocation was shown to occur more often in blastoid/pleomorphic mantle cell lymphoma variants. This finding was associated with a shortened overall survival and progression-free survival. 3

–Chelsea Marcus, MD is a third year resident in anatomic and clinical pathology at Beth Israel Deaconess Medical Center in Boston, MA and will be starting her fellowship in Hematopathology at BIDMC in July. She has a particular interest in High-grade B-Cell lymphomas and the genetic alterations of these lymphomas.