Understanding and appreciating different generations is critical for effective and productive teams, departments, and companies. Currently, there are five different generations in the workplace: Traditionalists, Baby Boomers, Generation X, Generation Y/Millennials, and Generation Z. A wide variety of experiences exist between these generations. For example, most traditionalists grew up without television, while almost all Generation Z’ers have a cell phone. If we look deeper, however, we can see commonalities between Traditionalists and Gen Z; both grew up during economic strife (The Great Depression and the Great Recession, respectively). Understanding each other’s views and values will allow different generations to increase their appreciation of one another. This, in turn, will lead to better communication and collaboration because people are now talking from a sense of appreciation and acknowledgement. When people feel heard, understood, and valued, they are more likely to invest time and energy into their projects and jobs and they are more likely to stay at an organization. Truth is, we need people of all generations to make organizations effective. You want the “getting the job done” attitude of the Traditionalists, the teamwork skills of Baby Boomers, the self-reliance of X’ers, the multitasking abilities of Millennials, and the entrepreneurship of Generation Z. Combined, these qualities create a powerful workforce that is able to handle any challenge that comes its way.

It is important to remember that learning can, and should, go both ways: newer generations can pay attention to the older generation’s lessons and knowledge, while older generations can learn a lot from the younger ones (and not just about how to use technology). Each generation has its own unique perspective, challenges, and contributions, and we can all grow by listening to and learning from people who are different than us. Generational diversity is one way to strengthen your team.

-Lotte Mulder earned her Master’s of Education from the Harvard Graduate School of Education in 2013, where she focused on Leadership and Group Development. She’s currently working toward a PhD in Organizational Leadership. At ASCP, Lotte designs and facilitates the ASCP Leadership Institute, an online leadership certificate program. She has also built ASCP’s first patient ambassador program, called Patient Champions, which leverages patient stories as they relate to the value of the lab. 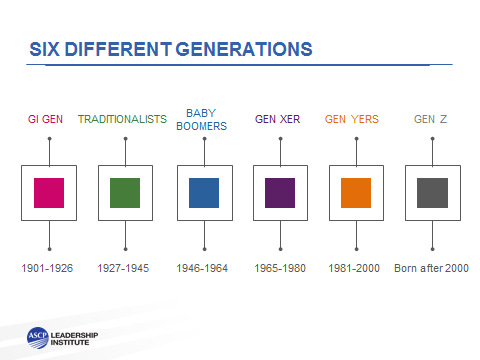 The differences are many and yet so few.  This is stated so clearly by Gretchen Gavett when she wrote in the Wall Street Journal:

“Baby Boomers, Gen Xers, Millennials, the Gen Z up-and-comers – we all want the same things, (income, sure, but also purpose, and to feel valued) just in slightly different ways. The challenge is to look past the stereotypes and listen to one another so that good work gets done efficiently and humanely.”

Let’s begin with the GI Generation. The youngest of this generation are in their early 90’s so they are almost non-existent in the workplace.  They are our oldest living generation and were born at the beginning of the 19th century. Most of the soldiers during WWII came from this generation.

Traditionalists make up 2% of the current workforce which is the smallest percentage. However, they represent the institutional memory of a workplace. They know and remember the organization’s past and founding goals. Typically born between 1927 and 1945, they went through their formative years during the Great Depression and its aftermath.

Baby Boomers are currently the largest generation at approximately 77 million people in the United States. (Generation Y runs a close second.) Born between the years of 1946 and 1964, they are the post-World War II generation. The Baby Boomers represent about 29% of the workforce; that number is declining by the day.

Generation X is bookended by the two largest generations, Baby Boomers and Generation Y. They are born between 1965 and 1980. They make up approximately 23% of the workforce.

Generation Y, also known as the Millenials, are born between 1981 and 2000. The Millenials are currently about 42% of the workforce, which makes them the largest working generation.  They have their own values and characteristics (as do the other generations) their numbers make them a force to be reckoned with.

Generation Z is our newest generation.  They’re currently around 4% of the workforce and growing.  They grew up during the great recession after the early 2000’s.  We are learning about what the Generation Z’s value and their characteristics as each day passes.

The challenge we all face: how can we connect, communicate, and collaborate most effectively in the workplace and outside of the workplace?

-Catherine Stakenas, MA, is the Senior Director of Organizational Leadership and Development and Performance Management at ASCP. She is certified in the use and interpretation of 28 self-assessment instruments and has designed and taught masters and doctoral level students.

One thought on “Why is it Important to Learn About Generations?”