A 37 year old Indian male presents to the emergency department with complaints of a cyclic fever (102-103°F), chills, fatigue and a severe headache. He denies nausea, vomiting or diarrheal symptoms. His travel history is significant for a recent 2 month vacation to India and he is concerned he has malaria, given his symptoms. He reports no sick contacts or suspicious ingestions during his trip and his other family members are well. On physical exam, he is ill appearing, with dry mucous membranes but has no aversion to light or neck pain. Blood work revealed a normal white blood cell count and elevated liver enzymes (ALT 383 U/L, AST 282 U/L). Blood and CSF were collected and sent to the microbiology laboratory for Gram stain and culture. Additional tests for influenza, viral hepatitis and malaria were performed. 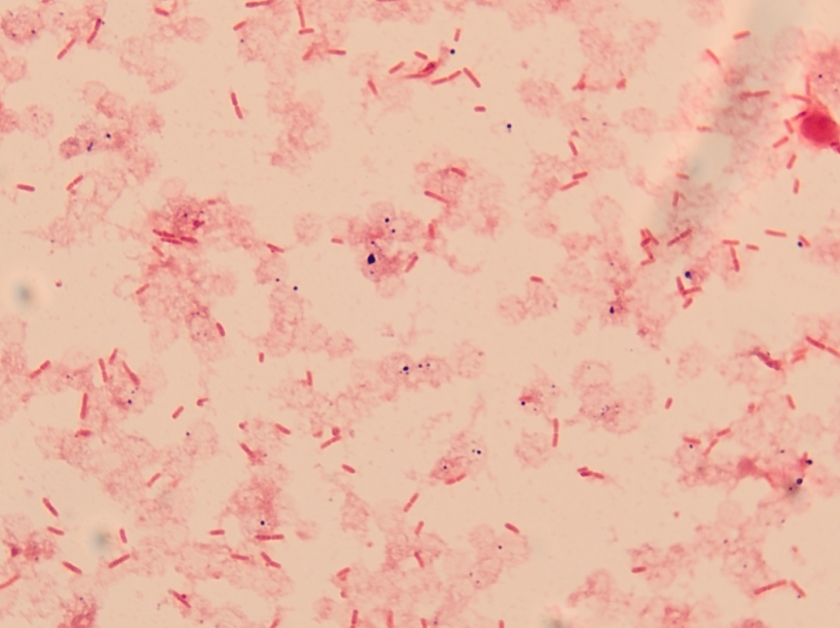 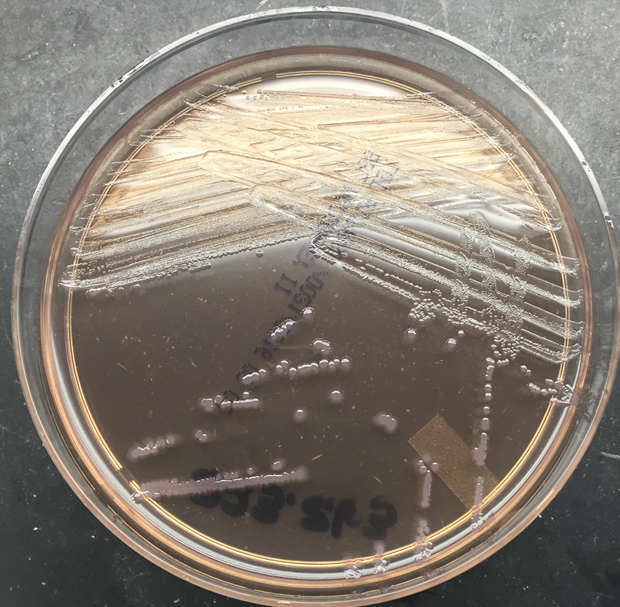 Within a day of collection, multiple blood cultures were positive for a large Gram negative rods (Figure 1). The organism grew after 24 hours incubation in CO2 at 35°C on blood, chocolate and MacConkey agars and was lactose negative (Figure 2). The identification by MALDI-TOF was Salmonella group. The isolate was then sent to the public health department for additional testing via molecular typing methods. The diagnosis of Salmonella serotype Typhi was confirmed. Testing for influenza, viral hepatitis and malaria were all negative.

Salmonella serotype Typhi is a motile, Gram negative rod that is a member of Enterobacteriaceae family.  Typhoid fever is the cause of serious bloodstream infections in developing countries and the great majority of cases in the United States are identified after recent travel. Clinically, it presents with high fever and headaches, in the absence of gastrointestinal manifestations and causes a more severe illness than other Salmonella serotypes. The infecting organism, of which humans are the only known reservoir, is transmitted by food or drink contaminated with feces or person to person contact and has a low infectious dose. Healthy carriers that are able to asymptomatically shed the bacteria have been documented.

Salmonella serotype Typhi is more commonly isolated from blood rather than fecal specimens and grows well on a variety of media including blood, chocolate and Hektoen enteric agar (Figure 3). The characteristic reaction on a triple sugar iron (TSI) slate is alkaline/acid (K/A, only glucose fermented) with a small moustache of H2S production at the site of inoculation and no gas production. In addition, a positive lysine decarboxylase reaction helps to distinguish Typhi from non-typhoidal Salmonella subspecies I members. MALDI-TOF mass spectrometry is successfully able to identify the isolate as Salmonella spp., but additional testing must be performed to determine the particular serotypes.

Traditionally, serotyping of the O (somatic), H (flagellar) and Vi (capsular) antigens and applying results to the Kauffmann-White scheme is useful in confirming the diagnosis of Salmonella and defining the serotype name. In the case of Salmonella serotype Typhi, the somatic antigen groups as D1 and the Vi antigen is present. The Vi antigen (heat labile) sometimes masks the identity of the O antigen (heat stable). In these cases, heating the bacterial suspension in boiling water for 15 minutes and repeating the O antigen serotyping yields the correct O antigen. Given the expansion in molecular testing, methods based on identifying the genes responsible for the serotype are gaining favor.

Due to the high mortality rate in untreated cases of typhoid fever, treatment with antibiotics is necessary and given the increasing levels of resistance reported, particularly to ciprofloxacin, susceptibility testing should be performed in all cases of Salmonella serotype Typhi. It is recommended that ampicillin, a fluoroquinolone, trimethoprim-sulfamethoxazole and a 3rd generation cephalosporin be reported for all typhoid isolates based on the most current M100S-26 CLSI guidelines. Also, in the case of S. Typhi, reporting susceptibilities to azithromycin is encouraged (MIC ≤16 µg/mL S, ≥32 µg/mL R, interpretative criteria based on MIC distribution data).

In the case of our patient, he was started on ceftriaxone and continued to receive this IV antibiotic for seven days after blood cultures became negative. Susceptibility testing showed intermediate results for ciprofloxacin by disk diffusion and azithromycin was found to be susceptible with an MIC of ≤16 µg/mL. The patient has an uncomplicated hospital course and made a complete recovery.

-Lisa Stempak, MD, is an Assistant Professor of Pathology at the University of Mississippi Medical Center in Jackson, MS. She is certified by the American Board of Pathology in Anatomic and Clinical Pathology as well as Medical Microbiology. Currently, she oversees testing performed in both the Chemistry and Microbiology Laboratories.  Her interests include infectious disease histology, process and quality improvement and resident education.