A 14 year-old-boy with Cystic Fibrosis had a respiratory culture collected at his routine clinic visit. It grew abundant mixed respiratory flora, and rare Gram-negative coccobacilli. This organism grew as non-lactose fermenting colonies on MacConkey agar (Figure 1) in approximately 36 hours and was oxidase and catalase positive. The isolate was identified by MALDI-TOF MS with a score of 2.39, which is acceptable for species-level identification. 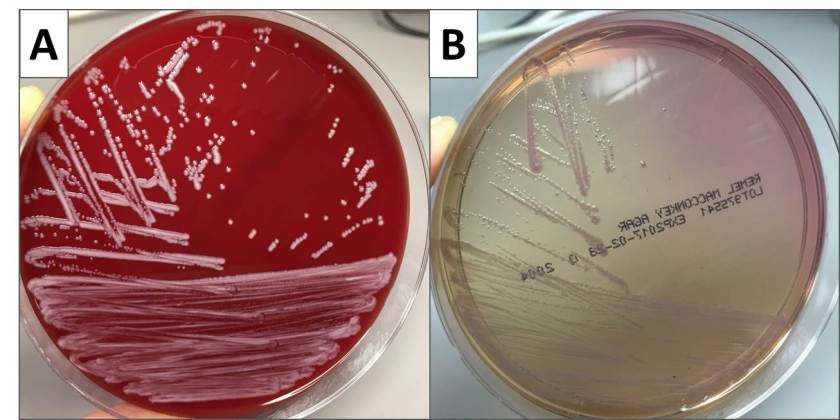 Our isolate was identified as Bordetella bronchiseptica. Bordetella spp. are small Gram-negative rods that often appear as coccobacilli. Like other Bordetella spp., our isolate was catalase positive. Oxidase results vary across the genus, but B. bronchiseptica is oxidase positive. Some Bordetella spp. including B. pertussis and B. parapertussis, are very sensitive to metabolites and toxic substances found in many types of microbiological media. For the best chance of recovering these fastidious Bordetella spp. in culture, specialized agar such as Regan-Lowe, Bordet-Gengou, or Stainer-Scholte medium along with extended incubation periods are used. Due to the difficulty of culturing B. pertussis and B. parapertussis, these days culture is only performed at large reference laboratories or public health facilities. Testing by PCR is the current clinical practice and has greatly improved the sensitivity of detection for these fastidious organisms. In contrast, other Bordetella spp. including B. bronchiseptica are routinely recovered in culture using standard laboratory methods.

The most clinically relevant Bordetella spp. in humans are B. pertussis, the infectious agent of whooping cough, and B. parapertussis, which causes a similar illness to B. pertussis but generally symptoms are less severe. B. bronchiseptica causes respiratory infections in many animals including cats and dogs, and is the infectious agent of kennel cough.  B. bronchiseptica can cause respiratory infection in humans who acquire the bacterium primarily from their infected pets. Human infection is rare, and most likely to occur in immunocompromised patients such as those with poorly controlled HIV or Cystic Fibrosis.

Our patient was not having an exacerbation at the time of specimen collection, so he continues to do well. We expect to find B. bronchiseptica in his future sputum specimens, but the pathogenicity of B. bronchiseptica in such a low amount compared to respiratory flora is unclear.

–Erin McElvania TeKippe, PhD, D(ABMM), is the Director of Clinical Microbiology at Children’s Medical Center in Dallas Texas and an Assistant Professor of Pathology and Pediatrics at University of Texas Southwestern Medical Center.