A 22-year-old male presents with shortness of breath and fatigue. He is planning a trip to an area in Africa in which chloroquine-resistant malaria is endemic, and he was started on a prophylactic antimalarial drug regimen several days ago. A blood smear is performed, and stained with a supravital stain. What are the round inclusions within the red cells? 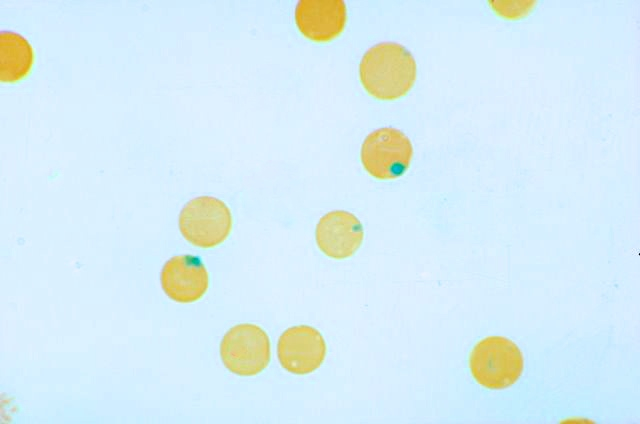 The inclusions in these red cells are Heinz bodies, which are characteristic of G6PD deficiency. In this disease, the red cells are less able to handle oxidant exposure (common precipitating factors include infection, drug ingestion, and exposure to certain foods, such as fava beans). Following oxidant exposure, hemoglobin denatures and precipitates, forming so-called Heinz bodies which stick to the inside of the red cell membrane, leading to intravascular hemolysis and splenic destruction. Patients with G6PD deficiency typically develop symptoms of hemolysis after a period of two to three days following oxidant exposure. The anemia is usually short-lived and self-limiting.

-Kristine Krafts, MD, is an Assistant Professor of Pathology at the University of Minnesota School of Medicine and School of Dentistry and the founder of the educational website Pathology Student.