Case history:
A mother brought her 5 year old son into his pediatrician with a “snake” that she found in his stool. Otherwise, the patient was completely asymptomatic. 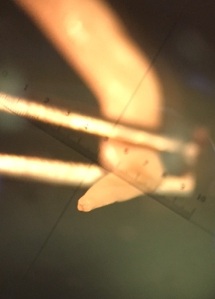 Ascaris is the most common Helminth affecting humans. It is also the largest of the roundworms (nematodes), growing up to 35 cm in length. There are several species of Ascaris however only A. lumbricoides affects humans.

Epidemiology
Ascaris occurs in areas with poor sanitation, hygiene and solid waste practices. Worldwide it is most common in tropical and subtropical areas.

Laboratory Diagnosis
In most cases, Ascaris is diagnosed in the egg form on ova and parasite exam. The fertilized egg is round, 45-70 microns in diameter and has a thick, mammillated outer wall which stains brown with bile. The unfertilized egg is larger (90 microns), are has a more oval shape with a less regular mammillated contour. Patients may also pass adult worms in the stool or less commonly they may cough them up through the mouth. The adult worms have tapered ends with a three-lipped mouth (“tricuspid” mouth). The female is larger than the male (female: 20-35 cm, male: 15-30 cm).

Clinical Symptoms
Clinically, most people affected with Ascaris are asymptomatic. With a very high worm load however patients may begin to develop complications related to obstruction, including abdominal pain, constipation, appendicitis and obstructive cholangitis. In younger children infection with Ascaris may result in stunted growth. Of note, immune reaction to larva in the lung may result in an eosinophilic immunologic response known as Löffler’s pneumonitis.

Treatment
Ascaris is treated with anthelminthic medication (albendazole, mebendazole or ivermectin). Therapy for Ascaris extremely effective and rids the patient of all adult, larval and egg forms.

-Javier De Luca-Johnson, MD is a 2nd year anatomic and clinical pathology resident at the University of Vermont Medical Center.

3 thoughts on “Doctor, There’s a Snake in My Poop”